I have been back in Small Town USA as of Saturday night.  Getting to JFK was much more complex than LaGuardia, I will try to never fly there again.  My plane was so small and I had to take the train out of Penn Station to AirTram all alone, so that was nerve wrecking. I also didn’t know which terminal to go to, and unlike the Buffalo airport, that makes a big difference.  I had to walk to the proper terminal because I got off at a stop that didn’t link to Delta.  I had a heavy suitcase, multipurpose tote, and shopping bag -that I refused to check (that would be 25 dollars less shopping money).  Once you get past the transportation issues, I adored New York.

The whole time I was there I was contemplating whether I could see myself living there and I still haven’t come to a conclusion.. but I guess we’ll find out whether I will have the internship opportunity to by the end of the month.  I had 6 interviews with Coach and they all went really well!  I am hoping I get the Visual Merchandising, Fashion Merchandising, or Social Media Marketing ones the most.  One of the interviews was with Reed Krakoff, Coach’s luxury line, and I kind of fudged that one up.  I froze a little with the designer questions, because I prepared myself with Coach information.. not Chanel, Kate Spade, and Tory Burch.  Two of which happen to be huge competitors.  I don’t regret anything though.

I sat across from a pair of Christian Loubitons and I am fairly sure I was one of the youngest people in the room.  This was not necessarily a disadvantage though: because an Associate’s Degree at 18 tends of stand out.  There were 100-150 of us in a big room.  I was intimidated beyond belief, but I tried not to let it show.

One of the interviewers called me the perfect candidate, which made me feel much better.  I name dropped my store manager’s names, the Entrepreneurship project I did incorporating being a possible franchisee of Coach, and new promotional tactics I have been using in the store.  I should have made more copies of my resume to be honest, but I tried to make up for it by blabbing.

Once I left the job fair style interviews, I was so excited that I decided to visit the Webster Apartments a block a way.  My fashion professor recommended them and they were in such close proximity it seemed like a good idea.

They were nice.  I almost suffocated in the cement 10×10 room that would cost me more than 1 grand per month though.  It’s just ridiculous how little money buys you in the big city.

The common rooms, meal plan, theater, and library looked nice though.  It’s really safe and only for women which makes daddy feel better about the whole thing.  I am still keeping my options open of course, if anyone has any intern housing suggestions near Midtown/Chelsea.

NYU and FIT have dorms that are available.  I wouldn’t be able to visit them before determining where I am staying June-Aug since I’m home now, but I’ll have to deal with that.

I did not get the chance to tour FIT or LIM during my short time in the city, which is a shame.  I passed FIT buildings a few times, but the weather was crazy and one day LIM even had a snow day.  I was really busy with interviewing, shopping, and going to comedy shows anyways.

The apartment I rented was directly in the middle of Yuppie paradise.  I really liked it.  We were pretty close to everything and walked everywhere to try and burn off all of the gourmet cupcakes we ate.

I could see myself doing it again, absolutely.

It’s the fact I would be doing it alone that scares me.  My sense of direction is pretty pathetic and I would only know a few people in the vicinity.  I love the diversity and opportunity though.  You need to take risks to get reward I suppose.

I was talking to the nicest lady on the flight back about all the big decisions I have to make.  She said that I give her hope for my generation.  That’s a lot of weight to carry, but hey I’ll take the title.

If she saw me at 1 in the morning before I flew out to NYC trying to decide what to wear for my interview, she might take that comment back though.  I was throwing clothes and had mixed messages going through my head about the impression I wanted to make.  Once I got the interviews, I realized that my red dress would have been fine.. but I played it safe and conservative.

I wore my little black A-line dress, large pearls, and leather quilted boots with black tights. I had light pink lipgloss on and my hair was down.  My sequin coat and sequin scarf were the furthest things from understated, but I left them in the coat room anyways.

My turquoise Coach Isabella popped so well with my outfit.  It was impressive.  After the interview I went back to the apartment and went a more casual route, because we were going to Times Square. 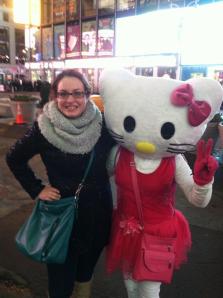 Times Square is too touristy for me.  If it wasn’t for the 4 floor Forever 21 and Hello Kitty, I would probably never go back.

I don’t like the fact that it looks like day time at night in that area and that it is drowning in .

That may be an odd comment from someone that wants to break into the Fashion Industry, but there is more to life.  I bought a rainbow coat from the 1960s at a vintage store, but not because there was an abundance of tacky advertisements trying to suck me in… it was because I genuinely liked it.  And that’s the part of fashion I really like: when you can look at something and know that it SCREAMS you.  It represents you and you are proud to wear it.  How many Hollister Graphic Tees would you want to say that about?